This author has not yet filled in any details.
So far Administrator has created 8 blog entries.
Email

Due to climate change, California is vulnerable to wildfires, changing ecosystems, rising sea levels, and intense drought. Currently, the U.S. Drought Monitor shows 93% of California is in a Severe Drought, while 40% is in Exceptional Drought (the highest intensity). If you’re interested in climate change, join us on March 24 for the SWE-OC dinner meeting and RSVP at https://sweoc-mar2015dinmtg-sponsoredbyicg.eventbrite.com.

Climate change is having a profound impact on California water resources, as evidenced by changes in snowpack, sea level, and river flows. These changes are expected to continue in the future, exacerbating flood risks and adding additional challenges for water supply reliability. Learn more about climate change at the March 24th SWE-OC dinner meeting, sponsored by Incledon Consulting Group.

Soak It Up: How to Manage Stormwater in Your Landscape 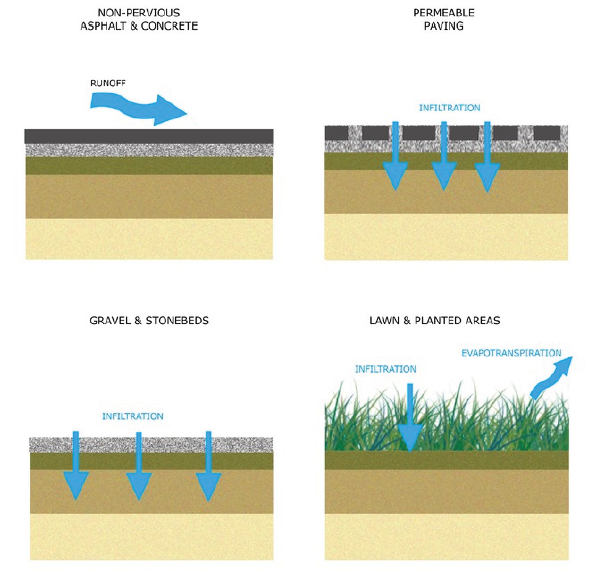 Snowmelt and spring rains are on their way, and in many places, excessive runoff from them is a recurring springtime problem. As a homeowner, you can help by allowing water to infiltrate your property instead of sending it offsite through storm drains.

Infiltration is nature’s way of slowly cleansing, storing and releasing water into the aquifer. That’s why creating a permeable landscape that absorbs stormwater is one of the best things you can do to improve water quality and reduce runoff. Learn how infiltration functions in the landscape and see some ideas for implementing it in your home garden.

Infiltration is the process of water entering and being absorbed by soil. Plants and soils have the amazing capability to cleanse and store water, and infiltration is one piece of their collective actions that control stormwater quality and volume.

One of the best things you can do for water quality in your local watershed is allow stormwater to infiltrate your property. It’s also an easy way to manage stormwater runoff because it uses soil’s natural capacity to hold and slow water down. Infiltrating water means less runoff overall, which reduces the load on water bodies downstream. Infiltration also is great for improving water quality because the ground cleanses water as it passes through biologically active soil that is stabilized by plants.

Buildings and paving create more water runoff because they displace ground that was previously permeable to rain. These impervious — also called non-pervious — surfaces act like a cap on the ground that won’t allow water to penetrate the soil. Additionally, water flowing off those surfaces […]

The Best Careers for Your Brain

Work might help keep your brain sharp well into old age—depending on your profession.

A new study in the journal Neurology finds that intellectually complex jobs, such as social worker, graphic designer or architect, are associated with better thinking skills later in life.

The research, from Scotland’s University of Edinburgh, tested 1,066 individuals, all born in 1936 and mostly retired, on memory, processing speed and general cognitive ability. Researchers gave the participants, all around 70 years old at the time, a variety of tests. To assess memory, for example, individuals were asked to repeat information after a delay, according to Alan Gow, one of the study’s authors. To gauge general cognitive ability, they completed patterns.

Individuals whose jobs involved analyzing or synthesizing data, such as architects and civil engineers, tended to have better cognitive performance. The same went for those who did complicated work involving people — instructing, negotiating with or mentoring others. Lawyers, social workers, surgeons and probation officers are all considered complex roles.

In less complex jobs, individuals spend more of their time following instructions from others or copying data instead of manipulating it.

The findings are in line with the “use it or lose it” theory, according to Gow, an assistant professor of psychology at Heriot-Watt University who began the research at the University of Edinburgh. The more you tackle tough problems, the less likely it is that cognitive muscle will decline over time.

It’s not clear what mechanisms might be behind the impact of complex work.

“More mentally stimulating jobs might have allowed people to accrue either some structural or functional changes in the brain,” such as better and faster neural connections, Gow said. Or, these individuals might simply have […]

With a population set to hit 9 billion human beings by 2050, the world needs to grow more food —without cutting down forests and jungles, which are the climate’s huge lungs.

The solution, according to one soil management scientist, is Big Data.

Kenneth Cassman, an agronomist at the University of Nebraska, Lincoln, recently unveiled a new interactive mapping tool that shows in fine-grain detail where higher crop yields are possible on current arable land.

“By some estimates, 20 to 30 percent of greenhouse gas emissions are associated with agriculture and of that a large portion is due to conversion of natural systems like rainforests or grassland savannahs to crop production, agriculture,” Cassman told NBC News at a conference in suburban Seattle.

The only practical way to stop the conversion of wild lands to farmland is grow more food on land already dedicated to agriculture, he said. Currently, the amount of farmland used to produce rice, wheat, maize and soybean, he noted, is expanding at a rate of about 20 million acres a year.

Cassman and colleagues unveiled the Global Yield Gap and Water Productivity Atlas in October at the Water for Food conference. The atlas was six years and $6 million in the making and contains site-specific data on soil, climate and cropping systems to determine potential yield versus actual yield farm by farm in nearly 20 countries around the world. Projects are ongoing to secure data for 30 more countries.

Once farmers are aware of their gaps, they can prioritize investments to close them, such as spending on fertilizer, a new irrigation system or different crop varieties. When scaled up to a global view, a seed company […]

How Los Angeles Neighborhoods Got Their Names 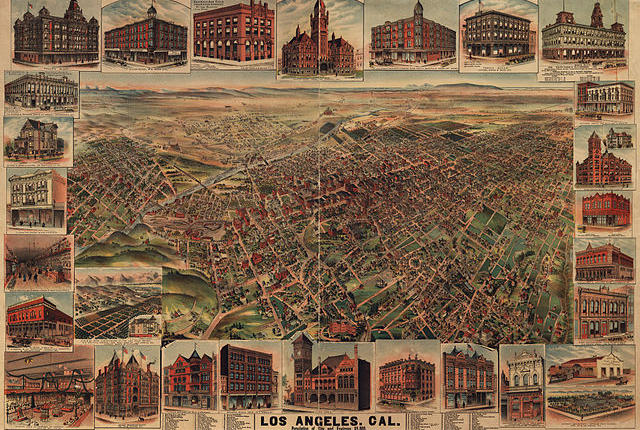 The divide between the different neighborhoods of Los Angeles can feel like one between cities, and in some cases—like West Hollywood, Santa Monica, Beverly Hills, and Culver City—it literally is. But residents of L.A. really do place stock in the neighborhood they live in, whether it be on the Westside or Eastside, downtown or nestled in the hills.

L.A. is a big place—the Los Angeles Times’ Mapping L.A. project has 272 neighborhoods in the city. Outlining the origin of all their names would be a project worthy of a large research university. In order to make this both manageable and comprehensible, I stuck to the neighborhoods and cities within a few areas of the Times’ map: the Westside, South L.A., Central L.A., Southeast, Eastside, and Northeast L.A. This leaves out the many valleys and mountains and bays that make Los Angeles County so sprawling, but it also hits most of the places you’d think of as L.A. proper. I also didn’t explain all of the many variations on Beverly, Hollywood, and some others, as well as many hyphenates and neighborhoods named after streets.

Apologies in advance to all those excluded. You’re still great.

Artesia was named for the area’s large number of Artesian wells, which are stored pockets of groundwater that sometimes flow to the surface. Because of the wells, Artesia eventually became a major dairy district in the early 1900s.

This land was owned by the family of Harriet Atwater Paramore when it was subdivided in 1912, hence the name.

The legend behind Baldwin Park’s name is a weird one. According to the city’s website, a man named “Lucky” Baldwin wanted to […]

A sleek, modern $300,000 house is rising in a parking lot overlooking the Hoboken waterfront with the New York City skyline as a backdrop.

But don’t expect a for-sale sign to go up anytime soon. Later this month, the new house will be disassembled and shipped nearly 2,439 miles to Irvine, Calif. Then it will be rebuilt by students from Stevens Institute of Technology, who are entering the house in the U.S. Department of Energy’s Solar Decathlon.

END_OF_DOCUMENT_TOKEN_TO_BE_REPLACED

Salaries for Engineers on the Rise

The data were compiled from an online survey of 12,720 engineers in multiple age groups and employed in varied industry sectors and technical disciplines. Nearly 72 percent of the respondents indicated a salary increase.

Additional findings:
– Engineers working in the field of ocean engineering represent the highest full-time salaried median income, $169,000.
– The median annual income is the highest in California, Nevada and Hawaii, and lowest in the Upper Mountain states.
– Nearly 57 percent of respondents are recipients of a standard benefits plan from their employers; the remaining group receives flexible benefits.

“There has never been a more exciting time to be an engineer, and the results of the 2012 Engineering Income and Salary Survey confirm what we already know: Careers in engineering are rewarding on many levels,” said Thomas Loughlin, executive director of ASME.

“We hope the survey will be a resource to the many organizations that track employment and salary data on engineers,” said Alicia Karwoski, P.E., Director of Professional Activities at ASCE. “We are encouraged to see engineering salaries on the rise at a time when more engineers are needed to spur technological innovation in the United States and around the world.”

ASME and ASCE have been collaborating on the salary survey report for the last five years. The firm enetrix, a division of Gallup Inc., prepared The Engineering Income and Salary Survey, a broad report which breaks down key […]